When I was still at school, in Cornwall, I used to learn to improvise (on clarinet) by playing along to a Charlie Ventura LP – he was on a variety of saxophones – often playing the 33rpm record at 16rpm (half speed) to at least give me a chance to keep up.

It was obvious even then that, sooner or later, I’d leg it to the nearest Secondhand Shop and swap the clarinet for a saxophone !  But there weren’t many Secondhand Shops, let alone with old saxophones for sale, in Cornwall in the late 50’s / early 60’s.

But that was a few years later, in Bath, just behind the Bus Station, where I swapped my school clarinet for a knackered old ‘York’ silver plated (well, mostly…) alto sax – and then, shortly afterwards, I joined my first Soul Band – Heart ‘n Soul.   Wiltshire Soul rocked !!!

How can I remember all that from the 60’s, but yesterday is a pretty much a blur…?  Sigh…

( Also published on my other site –    http://ctenorsax.blogspot.com )

Keilwerth New King tenor saxophone, 50’s vintage – the one that got away…

Although I’m quite happy with my current tenor sax, a German built B&S ‘Blue Label’ (pics here – more about it later), I couldn’t resist the chance to try this 50’s Keilwerth New King when it came up on eBay.  The seller was offering ‘Returns’, so minimal risk, and there was no other interest. Looked recently repadded with brown (plastic) reflector pads.

Played as you’d expect, thick smokey sound, especially low down, powerful sound, and plenty of cut in reserve with my favourite Couf J10*S mouthpiece, BUT (extremely sad part…) most of the low harmonics either weren’t quite in the same place as my other horns, or (even worse…) were not to be found – even after several days of trying, even with several different mouthpieces !  Naturally I checked a few things, like pad heights – especially that the front-F opened ‘just a crack’.

I’m so used to using the low harmonics (G-C) as a natural extension of the normal range that it was quite a frustrating experience.  Switching back to the B&S, where they just ‘popped out’, just confirmed the inevitable.  I had a very nice Keilwerth Tone King ‘Exclusiv’ back in the day, I don’t remember any similar problems with it.

So, it has to go back, thanks to the seller for allowing returns, obviously all shipping at my expense.   I’ll always look at the pictures – click here – and wish that it’d been a bit more forthcoming.  Sigh…  Onwards and upwards !

( Also published on my other site –    http://ctenorsax.blogspot.com )

Now that really IS a leaky tonehole…

Carolyn emailed me, and put some pictures up on Flickr of an interesting C-Melody saxophone she’s acquired.

At a quick glance you’d notice the’Pontiac rings’ on the bell/bow joints, and that (partially) soldered tonehole, and say “Ah – Martin or IBI Co“.  But then there’s both bell toneholes on the same side, and the long soldered ‘guard’ feet so typical of European design.  So, a little more investigation is called for.

I guess more will be added later, as the mystery unravels…  Any suggestions as to the origins ?  Some of the angular bits on the mechanism (and the bow/bell joint rings) are very similar to my recently acquired Kohlert C-Melody  – but only some !

1931 Martin C-Melody Sax, a photo by dorset driftwood on Flickr.

The C-Sax Annexe is slowly rising – like Pheonix – from the ashes…
This is just exploring if / how I can integrate pictures from my Flickr sets. Made in the early 30’s, and now (mostly) repadded with cheap Chinese reflector pads – they aren’t that bad – it’s a very useful instrument.
Shame about the ‘up-front and close’ playing position, but that’s the way it was in the Roaring 20’s. I do draw the line at ‘Dapper Dan’ hair gel tho’ 🙂

Click on this link to view the complete set – 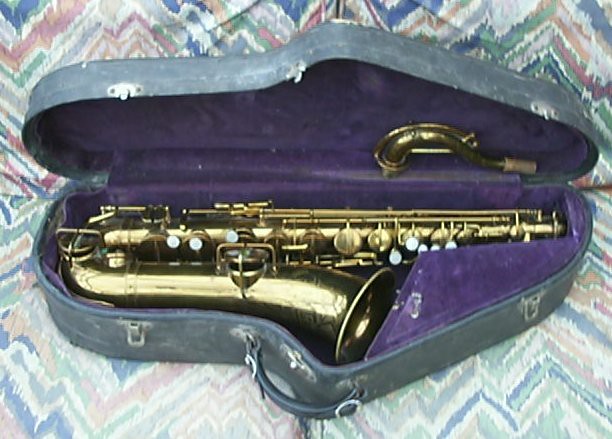 (btw, the pictures were taken before the repad…)

( just a test post from csax.net, to check that it’s all still working

Ever feel like the world is closing in around you ?

OK it’s not in Dorset, this is in Sopot, in Poland – but then Polish is heard all over Weymouth – ” Witamy w Dorset ! ”  This really is how the world feels, some days, I’m sure I’m regressing to childhood… Does that mean that at some stage I’ll be too young to drink (again) ? Amazing design !

Bit surreal this – but I have this wonderful vision of all the over-loud attention-seeking guitarists sailing away into the sunset on their axes…  Can’t wait to see ’em all jammed up in the canal locks.

Apologies to all the sensitive, quiet, unassuming and caring guitarists that I’ve enjoyed playing with over the decades, of course this doesn’t apply to you !

Thanks to Greg Fiske for sharing Fuzz James‘s photo.

P.S. Watch out for those saxophone playing submariners, “torpedoes away !”

Update 07 July : btw, it IS for real – CLICK HERE for the full story – what did we ever do before Google ?